The Bright Initiative led a workshop for the students participating in upReach’s Tech 500 program on January 12. 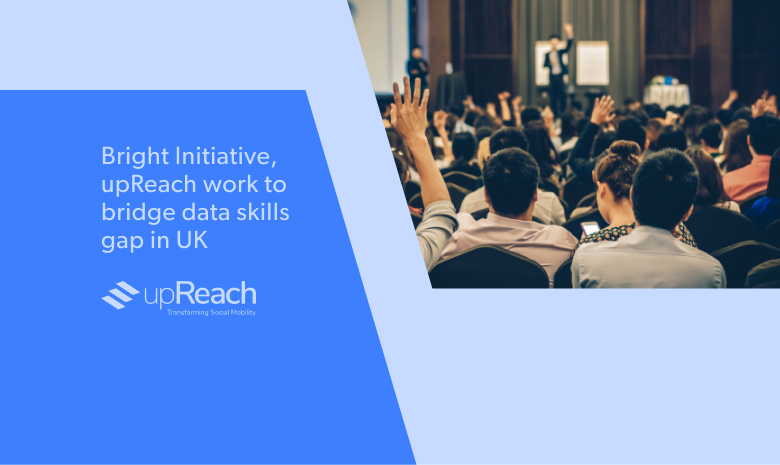 The event was the first in a new series of Tech Speaker events that the award winning charity is hosting throughout 2022.

As part of its mission, The Bright Initiative – a global pro-bono organization that uses public web data to drive positive change – focuses on helping to drive up data skills by providing insight and expertise to educational institutions around the world.

This commitment to education sees The Bright Initiative lead and take part in masterclasses, workshops, thought leadership sessions and seminars for a wide variety of global partners through The Bright Academy – typically participating in five or more of sessions like these each month.

Last year, The Bright Academy led 144 sessions with over 120 partnered academic and government institutions, supporting anything from academic research to driving public policy and back over to the promotion of data skills in higher educational settings.

Sharing similar values with The Bright Initiative, the upReach Tech 500 program is designed to boost the representation of lower socio-economic individuals within the UK tech sector. It supports a cohort of hundreds of disadvantaged undergraduate students, from 40 universities across the UK, who are looking to secure future graduate roles in technology.

The program includes sessions delivered by leading industry experts that are tailored to increase awareness around the broad range of tech roles available throughout the sector, such as the Tech Speaker Series, which is being introduced this year as a key part of the Tech 500 program.

Participating as the first guest of the Tech Speaker Series, General Manager of The Bright Initiative Keren Pakes led a career-focused workshop highlighting the prospects tied to a career in data science.

Pakes took the opportunity to present students with an industry-leading view of the ways in which data is being utilized across a range of sectors, and the skills that are needed by graduates looking to build careers in data.

Sharing expert data-driven knowledge with the next generation of UK leaders is of the utmost importance in order to promote an understanding of the vital role data plays in society and the economy, according to Pakes.

“Every industry relies on public web data – there is not one that I can think of that doesn’t use web data in some way or another,” Pakes told the students.

“Even once reluctant industry sectors such as finance are beginning to shift away from using traditional data sources , only realizing  they have to also rely on external web data sources to achieve a complete picture,” she added.

Pakes explained that while the advent of big data began in the 1990s, during the coronavirus pandemic the pressing need for real-time data pushed many traditional industries relying on traditional or internal data to look towards the use of web data to secure more reliable insights and get a real snapshot of their industries – only web data kept-up with the rapidly shifting reality.

Within the more common uses of public web data you will find cases such as price comparison, market research, product development as well as quality testing.

However, web data has far-reaching capabilities and proves to be useful within number non-conventional scenarios as well.

In order to show “creativity and data go hand in hand,” and illustrate an out-of-the-box way in which data can be applied, Pakes gave the students an example of data being used in sports.

In July 2020, at the peak of COVID, Kansas City Chiefs quarterback Patrick Mahomes signed the largest deal in NFL history, a 10-year contract extension worth $450 million.

“That deal was unheard of at the time,” Pakes said. “But the Chiefs discovered that the Super Bowl winning quarterback is not only worth $450 million, but that he will also generate enough revenue for the team to cover his $450 million salary much sooner than his contract expires – within four to five years they predicted.”

She explained that the Chiefs analyzed Mahomes’ deal using public web data to predict the future demand for ticket sales, cost of parking lots, food, education as well as real estate prices around the stadium.

The Chiefs additionally made use of historical data from other successful NFL deals and player performance-based metrics to eventually arrive at the $450 million offer – without thinking twice about it.

Building off the same premise, Pakes highlighted a few of the projects supported by The Bright Initiative to explain how organizations are using public web data to tackle the most pressing global issues of our time.

Pakes detailed a community service project supported by The Bright Initiative called FindAShot.org. FindAShot.org helped thousands of Americans find available COVID-19 vaccination appointments during the early stages of the vaccine rollout, when many were finding it impossible to book, let alone find, open appointments to receive their jab.

Using Bright Data tools to collect public data from pharmacy booking sites across the US, FindAShot.org built an automated online appointment checker that served as one streamlined search engine, like a “KAYAK” for COVID-19 vaccination appointments, which solved a major issue for thousands of Americans in a most crucial time.

Public web data also has the potential to stop crime, Pakes said, giving the students the example of how The Bright Initiative is working with Human Trafficking Initiative (HTI) Labs’ to fight human trafficking in the commercial sex industry

“In the last month, HTI Labs has been able to prevent over 50 cases of sex-trafficking, which is a lot with regard to the normal rate of solving such crimes,” Pakes said.

These are just some of the examples that illustrate the power of web data for good, and some of the work being done by The Bright Initiative and its 350+ partners to drive social change and create a positive impact worldwide, Pakes said.

However, In a world without access to public web data, such social initiatives wouldn’t be possible. The trajectory of progress and innovation would be constricted, companies would be unable to compete openly and at the end of the day the consumers and the public are the ones who would suffer.

“Data is an engine behind our economy, our market, our industry, our society and it is clear why everyone relies on data,” Pakes said to the students. “We must ensure the whole of society benefits from fast-moving advances in data.”

For the students, it has reached a point where every organization uses data-driven insights to some capacity, as Pakes explained. There are a wide-range of roles available for data-skilled graduates, and within the demand there is an overarching opportunity for them to make an immediate impact in whatever industry they choose to settle within.